One drawback: your previous preferences are lost (because of technical things and stuff).

As the other guys sang: it’s getting better all the time 🙂

A version 1.0.1 is in the works, since we have found a few problems:

Proxymizer is seen as a proxy (HTTP) and connects in background to public proxy servers (HTTP or SOCKS), anonymizing originating address for all requests, from simple HTTP to any proprietary protocol, if the application supports connecting to a simple HTTP proxy.

Knowledge should be accessible to every living humain. And thanks to Proxymizer, it’s not possible, well, at least with an internet connection 🙂

2009-02-15: What to expect for next version, 1.0 – part 2
First proxy: allow user to specify a local proxy (or internet, or anything), so all proxymizer requests start through it. SOCKS and HTTP proxy server are supported by now.
Configuration: many options are customizable, such as proxy anonymity choice.
Possibility to avoid proxy servers in own country: for people who really want to go out of their country.
Please also note that you can submit your suggestions to http://proxymizer.uservoice.com (or click on the “feedback” tab on the right).

2009-02-10: Welcome to proxymizer.net
Proxymizer now owns its domain, thanks to a generous donator. The only and official proxymizer is now at proxymizer.net, but still hosted by SourceForge.

New proxy validator, specific for session-level (HTTP tunnel and SOCKS) proxy servers
An improved and ajaxified WebGUI (the configuration web site)
Strong relays validation. Less relays are kept, only the most reliable ones
New public proxy server sources
Differential configuration: when proxymizer initial configuration changes, your changes are applied back in a differential way, so you keep changes of both.

Anonymity check for HTTP GET proxy servers
Geolocation for proxy servers
Auto-update and security changes
Improvements in proxy checking
2009-01-21: Ready for next release
Everything is here as expected, plus an auto-update system.

Version 0.9 should be released in the next few days, and as the version number show, the one after this one will be an officially working product.

A RSS feed
A proxycheck page, which is more part of proxymizer application than website. It allows to check a proxy anonymity.
Some minor changes to stylesheet

Country identification, and related options, suchs as avoid your own country, use or exclude specified countries from relays
Proxy type detection for HTTP accesses (between transparent, anonymous and elite), to be really anonymous
You can’t wait? Me neither, but there is still work to do 🙂

The new version should be released later this month.

A lot of things have changed after two years of sleep:

All the code was refactored and moved to .NET 3.5 and C# 3.0
Some improvements in HTTP tunneling proxy management (not perfect anyway)
All CPU overload problems have been solved
It just looks like we have a working product 🙂
The next few missing things before a version 1.0:

Proxy type detection (currently all proxy servers are used, and especially in HTTP GET mode, the application does not fully anonymize the browser)
Better HTTP tunneling management (the hard part being the detection of lazy proxy servers… The ones disconnecting after a few seconds)
Auto-update

A new release is coming soon (now using 0% of you CPU). Stay tuned.

2006-07-31: Another release. Proxymizer just got better 🙂
With a few fixes and a few enhancements, a new version 0.3 is now available for download.

2006-07-09: Release!
This is a CTP (Community Technology Preview) as they call it. This means that it’s not a beta, not even an alpha version.You can download it from the download page.

It is also time for us to recruit talented people (or anyone who volunteers, at this time).

2006-07-02: A first release coming soon!
Right, we said the same thing two months ago. However, as alcoholics say, “this time it’s for good”. Currently, proxymizer seems to work fine enough to be released and configured (as a preview, of course… There’s still a long road to go).

2006-05-22: We’re lamers… 🙁
By searching the three pages returned by google with “proxymizer” as query, we fell on a forum where a guy had almost the same product idea (and the same name of course). You can see it at http://www.delphi-forum.de/viewtopic.php?t=5661&highlight=proxymizer.

So, you, guy named bratok (or bratok3d?), please send an email to [email protected], it would be nice to exchange a few ideas (and credits :))

2006-05-22: ASP.NET, in peace too
After a ReST server, we also started an ASP.NET one, following the idea that an html interface could be a better idea than an winforms one.

2006-05-09: ReST, in peace
We experienced some trouble with .NET remoting (right, that’s odd), so we added a new assembly to the project, assembly named HttpMizer. It handles basic Http classes (formerly present in Proxymizer assembly) and a new Rest namespace, allowing to create a ReST server and client, with transparent proxy (.NET is really amazing, sometimes). This may seem a bit too big, but it was so much fun to implement that I couldn’t resist…

Since the proxymizer engine works as expected, there may be a first development release (still on MS.NET only :() in the form of a MSI install. Please not that it won’t even be an alpha version, but closer to as development version, or “community technical preview”.

The first one: you’re reading it.
The second page is “what is proxymizer?”, and, well, you got the point.
The third page is the project status page, a kind of cheap blog.
Even if it is too early to think recruitment, we take seriously all logo proposals (as you may see: this one s*cks).

Your private life is private again! 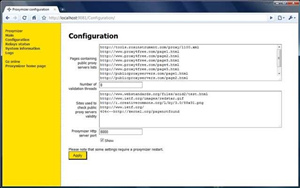 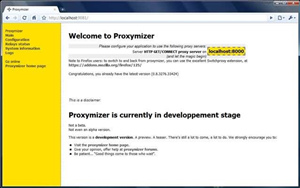